The Will of Michael Jackson

LAST WILL
OF
MICHAEL JOSEPH JACKSON

I, MICHAEL JOSEPH JACKSON, a resident of the State of California, declare this to be my last Will, and do hereby revoke all former wills and codicils made by me.

I declare that I am not married. My marriage to DEBORAH JEAN ROWE JACKSON has been dissolved. I have three children now living, PRINCE MICHAEL JACKSON, JR., PARIS MICHAEL KATHERINE JACKSON and PRINCE MICHAEL JOSEPH JACKSON, II. I have no other children, living or deceased.

It is my intention by this Will to dispose of all property which I am entitled to dispose of by will. I specifically refrain from exercising all powers of appointment that I may possess at the time of my death. 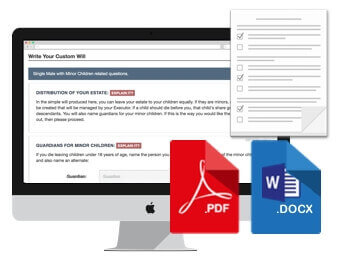 100% FREE of charge with instant .docx and .pdf download.

I give my entire estate to the Trustee or Trustees then acting under that certain Amended and Restated Declaration of Trust executed on March 22, 2002 by me as Trustee and Trustor which is called the MICHAEL JACKSON FAMILY TRUST, giving effect to any amendments thereto made prior to my death. All such assets shall be held, managed and distributed as part of said Trust according to its terms and not as separate testamentary trust.

If for any reason this gift is not operative or is invalid, or if the aforesaid Trust fails or has been revoked, I give my residuary estate to the Trustee or Trustees named to act in the MICHAEL JACKSON FAMILY TRUST, as Amended and Restated on March 22, 2002, and I direct said Trustee or Trustees to divide, administer, hold and distribute the trust estate pursuant to the provisions of said Trust, as hereinabove referred to as such provisions now exist to the same extent and in the same manner as thought that certain Amended and Restated Declaration of Trust, were herein set forth in full, but without giving effect to any subsequent amendments after the date of this Will. The Trustee, Trustees, or any successor Trustee named in such Trust Agreement shall serve without bond.

I direct that all federal estate taxes and state inheritance or succession taxes payable upon or resulting from or by reason of my death (herein "Death Taxes") attributable to property which is part of the trust estate of the MICHAEL JACKSON FAMILY TRUST, including property which passes to said trust from my probate estate shall be paid by the Trustee of said trust in accordance with its terms. Death Taxes attributable to property passing outside this Will, other than properly constituting the trust estate of the trust mentioned in the preceding sentence, shall be charged against the taker of said property.

I appoint JOHN BRANCA, JOHN McCLAIN and BARRY SIEGEL as co-Executors of this Will. In the event of any of their deaths, resignations, inability, failure or refusal to service or continue to serve as co-Executor, the other shall serve and no replacement need be named. The co-Executors serving at any time after my death may name ore or more replacements to serve in the event that none of the three named individuals is willing or able to serve at any time.

The term "my executors" as used in this Will shall include any duly acting personal representative or representatives of my estate. No Individual acting as such need post a bond.

I hereby give to my Executors, full power and authority at any time or times to sell, lease, mortgage, pledge, exchange or otherwise dispose of the property, whether real or personal comprising my estate, upon such terms as my Executors shall deem best, to continue any business enterprises, to purchase assets from my estate, to continue in force and shall be administered as a unit and that my domiciliary Executors shall supervise and control, so far as permissible by local law, any ancillary administration proceedings deemed necessary in the settlement of my estate.

On the date written below, MICHAEL JOSEPH JACKSON, declared to us, the undersigned, that the foregoing instrument consisting of five (5) pages, including the page signed by us as witnesses, was his Will and requested us to act as witnesses to it. He thereupon signed this Will in our presence, all of us being present at the same time. We now, at his request, in his presence and in the presence of each other, subscribe our names as witnesses.

Each of us in now more than eighteen (18) years of age and a competent witness and resides at the address set forth after his name.

Each of us is acquainted with MICHAEL JOSEPH JACKSON. At this time, he is over the age of eighteen (18 years and, to the best of our knowledge, he is of sound mind and is not acting under duress, menace, fraud, misrepresentation or undue influence.

100% FREE of charge with instant .docx and .pdf download.